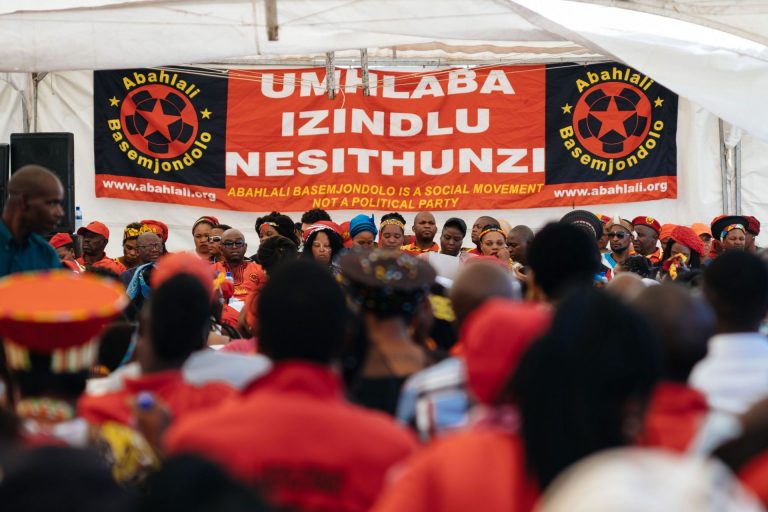 On Friday 8 October 2021, the South African police arrested three members of Abahlali baseMjondolo (AbM), the social movement of shack dwellers in South Africa. Nokuthula Mabaso, Thozama Mazwi and Sindiswa Ngcobo are all prominent leaders of the eKhenana Commune in Cato Crest, Durban, South Africa, a grassroots project of reclaiming land, housing and dignity through collective political organisation of the most effected.

All three were arrested on false and trumped up charges that are clearly connected to a longstanding political persecution campaign. These arrests follow a six month legal battle to clear the names of Lindokuhle Mnguni, Landu Tshazi and Ayanda Ngila who had spent the better half of 2021 in a crowded Durban prison accused of fabricated crimes. This also follows a four month battle to clear the names of AbM Deputy President Mqapheli George Bonono, the eKhenana branch secretary Maphiwe Gasela and Siniko Miya. All six activists targeted over the last year have played a protagonistic role in conceptualising, building and defending the eKhenana Commune – a place of hope that produces life, nourishment and livelihood.

The political and social significance of AbM and eKhenana

The eKhenana Commune is one of many occupations organised under the banner of the shack dwellers movement AbM. With over 100,000 members, AbM has been organising people in the struggle for land, housing and dignity in South Africa since 2005. AbM has consistently demanded that the neoliberal state in South Africa prioritise the social value of land over its commercial value. In upholding the spirit of this principle, AbM have insisted that all peoples living in South Africa (regardless of their nationality, race, religion, gender etc) are entitled to land, housing and dignity. In the South African context, this has routinely been denied. AbM has been one of the few organisations engaged in a consistent struggle for a South Africa, Africa and world free of oppression and economic exploitation.

Through the eKhenana Commune, AbM has broken new ground in this struggle for freedom. eKhenana was established in December 2017 and houses the Frantz Fanon Political School, the Thuli Ndlovu Community Hall, the Nkululeko Gwala Food Sovereignty Garden, the Sifiso Ngcobo Poultry Farm and a communal shop. Through this particular occupation AbM has been able to demonstrate a revolutionary, socialist praxis to the world. This has posed a threat to the neocolonial and neoliberal South African ruling class, whose power has hinged on their monopoly ownership and control of South Africa’s land and natural resources. Through this occupation, AbM has fought against the violence which impoverished and working-class people in South Africa are exposed to on a daily basis, whilst demonstrating to the people of the world how a different reality can be created and envision a different future.

For this reason, there has been a consistent and targeted attack on anyone from AbM who defends this experiment of socialist praxis. This week, as we recommit ourselves to the struggle for food sovereignty, the eKhenana Commune remains an important site of class struggle for our international project. The success of eKhenana is a victory against the capitalist system which clearly has no solutions for the problems that confront humanity. Attacks against eKhenana represent an attack against socialist praxis and all anti-capitalist, anti-imperialist forces throughout the world.

As the International Peoples’ Assembly, a network of over 200 progressive organisations, we join all those throughout the world in standing in solidarity with the people of eKhenana and Abahlali baseMjondolo. AbM is a leading mass organisation in our IPA process and we join them in calling for an immediate end to the political persecution that has terrorized the principled human beings that have built this resistance to indignity.

The demand for land, housing and dignity should not be a radical demand, but a basic one of human rights. Stand in solidarity with Abahlali baseMjondolo by sending solidarity statements, messages, videos, photos and other cultural items to [email protected] .